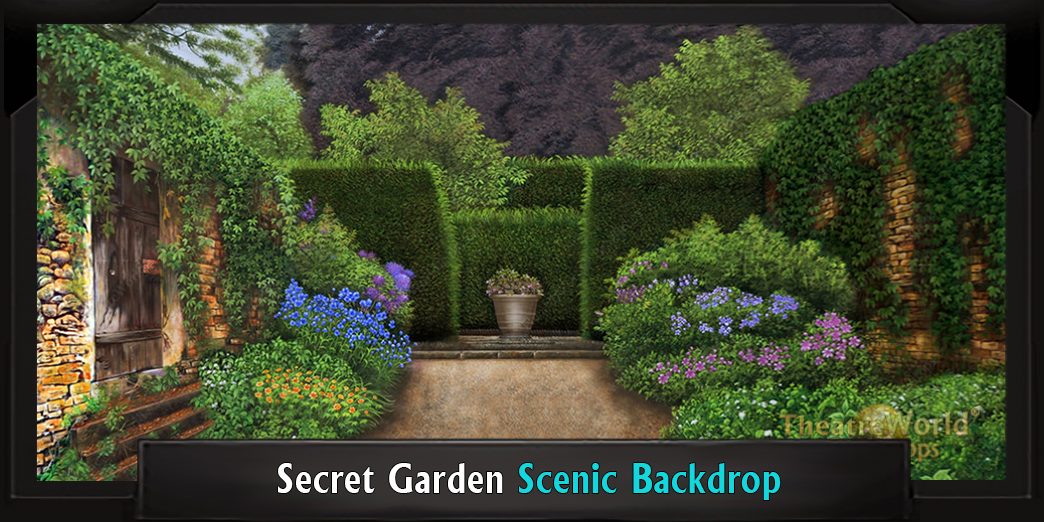 Everyone loves a good secret, not to mention a tale of redemption. The beloved musical The Secret Garden combines both in a beautiful tapestry of music and mystery that has captivated audiences for decades. The show is based on the novel written in 1911 by Frances Hodgson Burnett. (Author of  A Little Princess and Little Lord Fauntleroy, which both received their own musical adaptations.) The musical version of The Secret Garden was adapted for the stage by Marsha Norman (who also wrote the lyrics) and set to music by Lucy Simon. The show enjoyed over 700 performances and gathered Tonys for Best Book of a Musical, Best Actress, and Best Scenic Design.

The Secret Garden is the tale of young Mary Lennox. Following the death of her parents, she is sent to live with her reclusive, hunchbacked Uncle Archibald. Through her indomitable spirit, she uncovers a secret garden. As she nurses the garden back to life, she brings her family to a place of healing as well, and finds herself a new and loving home.

This timeless tale is an excellent choice for any theatre company to stage, especially if you have some incredible young talent to show off. Let’s take a walk through some of the TheatreWorld backdrops that can help you tell this timeless tale of the renewing power of love!

As the show begins, we meet Mary Lennox, the lone survivor of a devastating cholera outbreak. Now orphaned, she is sent away from her native India to live with her only remaining family in England (“There’s a Girl”). For a strong choice, stage the opening in as starkly and desolately as possible. You’ll really enhance the journey of the characters, especially Mary, by visually allowing the show to “blossom” from death to life.

TheatreWorld’s Ironworks Header and Legs set represents the empty, mechanical side of the Industrial Age, the time period in which this story is set. Moving set pieces and lighting could easily show the transitional elements of Mary’s journey, while the metallic colors and criss-crossing beams convey both strength and entrapment. Meanwhile, delicate curving lines and rosette-like details hint at the garden soon to be discovered.

The House Upon a Hill

Mary arrives at the household of Archibald Crane, the widower of her aunt Lily. His manor house, Misselthwaite, is cold and imposing. Moreover, his brusk housekeeper, Mrs. Medlock, doesn’t do much to comfort Mary upon her arrival (“The House Upon the Hill”).

TheatreWorld has some excellent drops to present the looming Misselthwaite to your audience. Try this Haunted Castle backdrop, for example. The washed-out, nearly monochromatic color scheme keeps the industrial, cold feeling. (The iron structures standing sentinel at either side of the drop tie in nicely with the Ironworks set as well.) The house itself is similarly uninviting. Between the foggy sky and gaping, darkened windows, you’ll ensure your Misselthwaite will give everyone goosebumps.

Misselthwaite doesn’t just appear haunted, however. Inside, the mansion is teeming with ghosts, both figuratively and literally. Persons from the past who can’t let go – or whom Mary and Archibald cannot let go of – haunt the halls, reminiscing (“A Girl in the Valley”). To Mary, it seems the manor is literally haunted. On her first night, she’s kept awake by an eerie sound (“I Heard Someone Crying”).

Try this Baroque Parlor backdrop for the interior of Misselthwaite. Heavy wooden panels adorn the walls. They are ornate enough to demonstrate the family’s wealth, while still maintaining an oppressive feel. Follow the dominantly-curved arches into the high ceilings and you’ll notice disembodied faces peering down from the shadows. Ghosts are everywhere in this haunted mansion!

A Hidden Garden, A Terrible Storm

Fortunately for Mary, not everyone at Misselthwaite is stone-hearted. Mary soon meets Martha, a maid who regales her with tales of the surrounding moorlands. Martha encourages Mary to explore the garden (“If I Had a Fine White Horse”). There, she meets Martha’s brother Dickon (“It’s a Maze”) and the old gardener, Ben Weatherstaff. With Dickon’s help, Mary summons a bird who helps her find the key to the hidden garden (“Show Me the Key”), but not the door which it unlocks.

Mary is determined find the locked garden, but her plans are thwarted by bad weather (“The Storm”). She is trapped indoors with her brooding Uncle Archibald and his brother Neville, both of whom grieve the long-dead Lily. (Who, alarmingly, Mary resembles, as the men sing in the song “Lily’s Eyes”.) Mary uses the gloomy weather to search for the source of the mysterious sound she keeps hearing at night and stumbles upon her cousin Colin, a sickly child who lives in terror that he will turn out just like his father (“A Round-Shouldered Man”).

Try this Victorian Bedroom backdrop for Colin’s room. The lofty height of the windows and ceilings would make it well placed within Misselthwaite. However, the lighter color palette contrasts the rest of the house. One could easily imagine Lily picking out the cheery curtains and white furniture for her baby before tragedy struck and she died during childbirth. Archibald would be determined to keep this room (and the child who reminds him of Lily), firmly separate from the rest of the brooding mansion.

A Mystery Solved – The Door to the Garden

When Mary is discovered in Colin’s room, she runs, terrified, out into the storm. However, she quickly moves from fear to joy when she discovers the door to the garden during “The Final Storm”. For Mary’s discovery, try this Blue Full Moon Header and Blue Full Moon Legs to set the dark and stormy exterior. With ebony shadows and deep blue colors, these drops capture the mysterious and looming moonlit grounds surrounding the manor. (While still keeping it shrouded in secrets.)

For some added celestial mystery, add the Blue Full Moon backdrop. The full moon peering through the dark forest could help show Mary the way to the locked garden door.

The Garden and the Moors

The garden, at first discovery, is overgrown with weeds from long years of neglect. Undaunted, Mary gets to work. As she toils, she imagines what will become of her as well (“The Girl I Mean to Be”). With the help of Dickon, Mary seeks the dormant heart of the garden, urging it back to life (“Wick”). Colin visits the garden as well, leaving his cloistered rooms for the first time in memory (“Come Spirit, Come Charm”).

Use this Field Stone Wall backdrop for the early garden scenes. Multi-hued stones combined with pale mortar make just the kind of enclosure that would hide an old, forgotten garden. Similarly, this Stone Wall backdrop could serve as the walls surrounding the hidden garden. With variegated bricks of brown, tightly interlocked, and blue highlights, it provides the same an enshrouding effect with a bit less wildness. Combine either drop with rambling vines and flowerpots with withered plants in them. With their help, you  will easily transport your audience into a long-neglected garden. Or, use Secret Garden, created with this very show in mind!

Where in the World

Back at the manor, Archibald’s brother Neville encourages him to visit the Continent, pressing his brother to leave the family property entirely to him. With Archibald gone, Neville makes plans to send Mary away to boarding school. Martha encourages the shaken Mary (“Hold On”). Bolstered, she writes to her uncle, begging him to return (“Letter Song”). Between the letter, and the haunted urgings of his wife’s ghost (“How Could I Ever Know”), Archibald is compelled to return to Misselthwaite.

Use this Moonlit Pathway backdrop to show the desperate wanderings of both Mary and Archibald. A lonely moon hovers in the sky, obscured by a midnight forest that could represent either the continent or the lonely moors.

Archibald returns to find his house empty. He searches the grounds until he stumbles across the now-unlocked garden. Instead of the forlorn wilderness it was when Mary found it, it’s now bursting with life and blossoming vegetation. Inside, he discovers Colin fully restored to health and winning a foot race against Mary. Rejuvenated by the garden, the sight of his recovered son, and the Mary’s winning spirit, Archibald has a change of heart. He embraces his new family. Together, the former lost souls – living and dead alike – vow to start a new life “here in the garden” (“Finale”).

Don’t miss the opportunity to really blow your audiences away with the garden’s transformation. TheatreWorld’s Belle’s Garden backdrop, brimming with romance and vitality and magic, is one great choice. Archways teem with crawling rose bushes. A lively fountain flows in the center, bathed in amber light. Add set dressing and flower pots to bring out the flower details in the foreground of the drop. It’s the perfect setting for the heartfelt finale.

For an even more romantic feel, try this Rose Terrace backdrop. Brick archways, which match the Stone Wall drop well, are smothered in rose bushes in pink, white, and red hues. They open into blue sky and greenery that disappears into the distance, suggesting the sprawling garden and the open future for Mary and her new family.

If you really want to go for an open, unfettered feeling, try this Natural Gardens backdrop. What a departure from the earlier enclosures! Delicate flowered bushes dot a wooden walkway, and a burbling stream rushes through the foreground. Trees fade into a hazy background that could easily be the misty moors of Misselthwaite. Everything about this drop shouts life, motion, and vigor – the very opposite of the garden’s initial incarnation. Let its natural beauty and open space draw gasps of delight from your audience, just as the final song tugs their heartstrings!

Every good story, its heart, is about love. The Secret Garden explores love and its many powers, from its ability to destroy a heart when love is lost, to its ability to bring life from death when it is found anew. By addressing adult issues of love, loss, grieving and guilt through the eyes of a child protagonist, the story strikes home on many levels and delivers a moving experience for any audience.

With a soaring score and a timeless tale, this is a great choice for any theatre company to add to their season. Contact TheatreWorld today for personalized drop packages that will bring this beloved story to your very own venue!