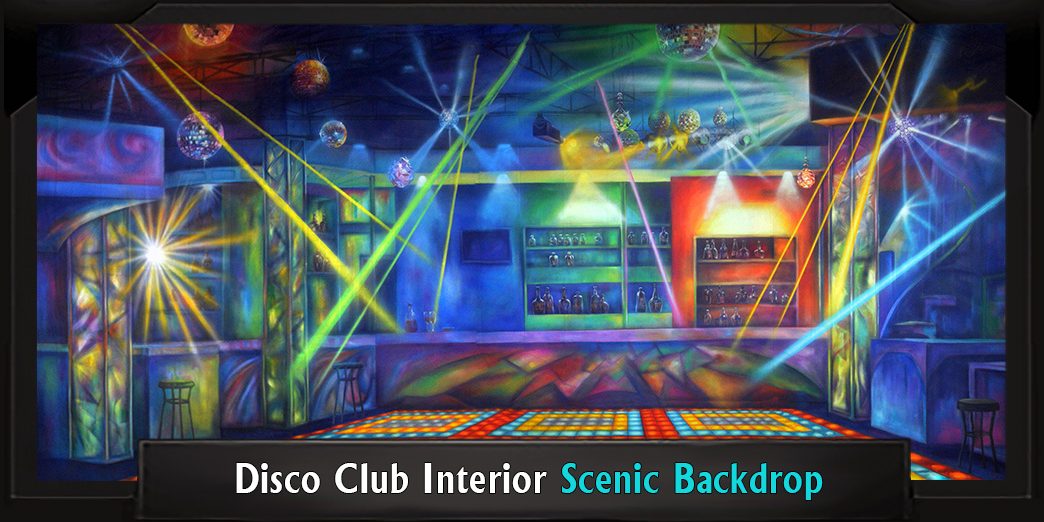 It’s 1976 and disco fever is sweeping the nation. Few films captured this cultural phenomenon like Saturday Night Fever. John Badham’s 1977 film enjoyed enormous commercial success. The film spread the popularity of disco worldwide. It also launched its star, John Travolta, into super-stardom. The film was adapted for the stage by Nan Knighton, and, like the film, features the enduring music of the Bee Gees. The musical premiered on the West End in 1998, won several Laurence Olivier Awards, and went on to enjoy international success. The toe-tapping soundtrack, paired with unforgettable dance sequences, never fails to delight audiences.

While the musical skirts around some of the darker themes in the movie, Saturday Night Fever still captures a unique facet of American history. It centers around Tony Manero, a young man from Brooklyn who dreams of a life beyond his dysfunctional family and dead-end job. The show follows Tony’s struggles to escape his abusive father, deadbeat friends, and the violence and drug cultures of 1970’s New York. The bright spots in Tony’s life are his weekends at the local discotheque, where he escapes his disappointing reality. When Tony learns of an upcoming dance contest, he decides it’s his ticket to the life he deserves – and, with the help of the lovely Stephanie Mangano, he’s sure he’s got what it takes to win.

Re-creating New York City during this tumultuous period in history is an essential element of staging Saturday Night Fever. Luckily, TheatreWorld has numerous drops designed to do exactly that! Let’s take a walk through Tony’s tempestuous life story and see how TheatreWorld’s drops can help the audience and cast alike step back in time.

We step into the world of Tony Manero with the opening number, “Stayin’ Alive”. The song pulses with the fiery beat of the tough streets of Brooklyn, where the luxuries and bright lights of Manhattan lure the teenagers of the nearby boroughs with promises of fame and fortune. Nineteen-year-old Tony Manero, seething with hormones and impatience for a real life, rails against his circumstances. He’s dying to escape his abusive father, smotheringly religious mother, and the shadow of a sainted brother.

On the Streets of Brooklyn

In the ’70’s, crime was high, drugs were everywhere, and pre-AIDs sexual freedom was rampant. Capture the grittiness of the pre-Koch New York of Saturday Night Fever by choosing just the right drop to capture this glorious city during one of its less glamorous fazes. This East Side Street backdrop is ideal for channeling Tony’s corner of Brooklyn. (The Bay Ridge neighborhood.) The drop combines light and shade, making the details of a city block come to life. A fire escape looms over the street, contributing to Tony’s feeling of being trapped. This would be a great backdrop for meeting Tony’s group of moocher friends, who fancy themselves to be a lot cooler than they really are (“Boogie Shoes”). For a similar look in different sizes, see TheatreWorld’s East Side Street – B backdrop.

This Under the Bridge backdrop brings a similarly onerous feeling. The vibrant street details and pops of color are brimming with energy, yet the elevated train tracks give the sense of being buried under the city. Rust and dirt details give the impression of dilapidation. With only a tiny sliver of open sky and complicated bridge works pressing down from above, it provides a perfect analogy for Tony’s social circumstances.

For a little more pop, try this Bleeker Street backdrop. Details such as the subway station and graffiti convey a distinct lower-class New York feel. (Yet remain timeless enough for a believable 1970’s feel.) Forced perspective draws the eye down the crowded streets in the background, giving a feel of forward momentum. However, the subway entrance is a subtle reminder that the gritty underground is still there.

The Manero family home is an average dump in a lower-class high rise. However, it’s his the family members themselves that threaten to stifle Tony’s dreams the most. Setting the mood for these suffocating scenes goes a long way toward channeling the internal struggle of our hapless protagonist. Try this Family Room Interior backdrop. The wood details and transoms suggest a fading Victorian design that has seen better days. Augment the weariness with drab set pieces that validate Tony’s desire to escape the low standards that surround him.

Tony is also frustrated by his dead-end job at a local paint store. Try this Vintage Warehouse – B backdrop for an urban, industrial feel. The high brick walls and steel work enhance Tony’s feeling of being trapped by his surroundings.

Desperate not to become another cliche, Tony escapes to the dance floor of his local discotheque. His dance moves quickly earn him admiration. Tony decides that an upcoming dance competition is his ticket out of this life. (And on to fame and fortune.) The discoteque is the antithesis of everything else in Tony’s world – color, vigor, freedom of expression, and movement! The Odyssey should be a stark contrast to the rest of the show. Luckily, TheatreWorld has some incredible drops that will help you bring it to life!

This Disco Club Interior is the perfect drop to capture the heart of this show. From glittering disco balls to multi-colored laser lights, there is so much going on in this drop! A psychedelic palette brings all the colors of the late ‘70’s into full play. The light-up floor channels the aesthetic of the movie without the distraction (or logistics) of creating the same flooring for your production. The bar and stools in the back complete the look of a crowded disco in the Boroughs.

Perhaps you do have a fantastic set designer who wants to build a dramatic disco set. Consider this Chromatic Rainstorm backdrop. It will augment your set with rainbow-colored pizzazz. Sparkling details add extra sizzle to the rainbow lights. Dark blue details at the bottom of the drop add some forced perspective.

If you’d prefer a more pastel palette, consider TheatreWorld’s Le Cirque Lights backdrop. Bright spotlights shine against a navy background, sending yellow, blue, and pink circles across the dance floor. It would make a delightful and active backdrop to your dance sequences.

Or, go really psychedelic and let these Laser Lights shine! Streaks of light green, fuschia, and blue dance across the drop, colliding in a delightfully chaotic prism in the center. Add some fog and lighting effects and use for numbers like “Night Fever”. You will draw your audiences in until they start feeling like“You Should Be Dancing” too!

Tony’s childhood friend Annette, who is hopelessly in love with him, convinces Tony to take her on as his dance partner for the competition. Her joy is short-lived however, as Tony has his eye on Stephanie, an aloof but talented dancer. Tony convinces Stephanie to enter the dance competition with him, leaving a crushed Annette behind (“If I Can’t Have You”). The collision of worlds continues to deepen as Tony’s feeling for Stephanie grow. Stephanie works in Manhattan, dances well, and seems to be the living embodiment of everything Tony wants in life.

Tony and Stephanie spend lots of time practicing for the dance competition, bringing up another important setting for the show. Try this Modern Loft Interior backdrop. Use this drop as a dance studio, or even Stephanie’s slick Manhattan apartment. (It’s a believable location for those rehearsals as well.) The open spaces in the brick-walled loft could be dressed for either location easily. Add some personal details, and it makes a great apartment. Or, fill with mirrors for a studio setting.

Likewise, this Brooklyn Loft backdrop would represent either setting very well. The large windows set in deep shadows provide a great play of light-and-dark. While they provide incoming light, the only view is of another high-rise. It adds to the stifling feeling of being trapped in the Boroughs. The worn details also make it clear that Tony is still out of reach of the affluence he seeks.

One of the most iconic images of Saturday Night Fever – as in the film – is the Verazzano Bridge. Its stunning profile is a literal and figurative link between Brooklyn and Manhattan; between the life Tony has and the one he wants. Indeed, the climax of the show has Tony’s friends literally hanging between life and death on its lofty heights. TheatreWorld has the ultimate drop to capture this effect with this Verazzano Bridge backdrop, in a way that no set piece can do alone.

If you’re in the mood to steer away from the film’s look, then try this In the Heights backdrop for added effect. In this drop, the bridge details feature prominently in the center, looming over the wide river it spans. However, the river is out of sight, and the bridge itself is hemmed in by the stolid brick buildings. This would accomplish the same effect, while playing up how unattainable Tony’s dreams of true freedom really are.

Tony and Stephanie win the competition, but at a bitter cost. Tony can see that the Latino couple who also danced were vastly more talented and deserved to win. His conscience forces him to give up his trophy in a critical character turning point that brings the point of the show into focus. Tony goes from a brash dancer to a truly introspective youth, realizing that the journey to his dreams is more complicated than winning a simple dance competition. The show wraps up with a surprising amount of heart to temper its fire.

This Lights of NYC backdrop is a loving tribute to the city that provides the backdrop for this show. The bright lights tantalize, even as the river blurs the lines, capturing Tony’s shifting perspectives. In the end, Tony resolves to move to Manhattan and make his mark, reminding us that despite the cost, journeys of the heart are worth fighting for.

Saturday Night Fever is a love letter to New York City and a tribute to the power of the human spirit. Take your audience on an unforgettable trip back in time. Capture the fire and passion of the 1970’s in all its glory. Contact TheatreWorld to select the perfect backdrops – then boogie your way into a successful run that will leave audiences dancing in their seats!