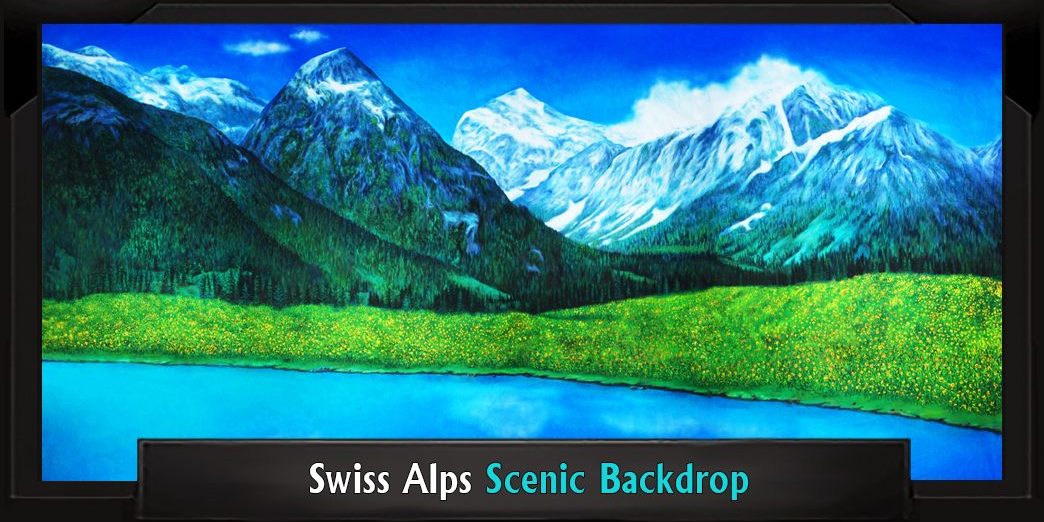 The Sound of Music Backdrops and Scenery Perspectives

The hills are alive with The Sound of Music! This enduring tale of faith, family, and love in the midst of one of the worst wars of modern times needs no introduction.  Rogers and Hammerstein based their stage adaptation on the memoirs of Maria von Trapp, the nun-turned-governess-turned-wife who famously smuggled her family out of Austria just ahead of the Nazi army. The original 1959  production won five Tonys and went on to enjoy countless stagings and revivals. (Including the definitive film adaptation starring Julie Andrews.) Today, songs like Edelweiss, Do-Re-Mi, and My Favorite Things are woven indelibly into the narrative of American theatre and far beyond.

This show is a classic through and through. Though audiences may think they are familiar with The Sound of Music after watching the movie for years, there are some distinct differences between the stage musical and the film version. Regardless, the show is sure to delight fans of all ages. Let’s see how TheatreWorld’s world-class lineup can make your production of The Sound of Music soar!

The Sound of Music Opening and the Alps

Before the show even starts, set the stage with the Sound of Music Main Drape, TheatreWorld’s dedicated drop for this show. Imagine your audiences taking their seats as this amber main drop effortlessly sets the mood.

Unless you have an extremely ambitious set crew and an enormous stage, there’s simply no better way to capture the majesty of the Alps than with just the right backdrop. This Swiss Alps backdrop is an easy suggestion. The drop features towering alpine mountains, dusted with crisp white snow and reaching into a sapphire blue sky. An emerald green field, dotted with dainty flowers, compliments the mountains. It’s easy to see Maria dancing and singing the eponymous opening song against this background!

Another option would be one of TheatreWorld’s several  Mountain Meadow backdrops. The drops have similar designs, but include variations intended to meet any vision. (Pictured above: Mountain Meadow – B and Mountain Meadow – C.) All of these drops feature sharp-edged mountain ridges, towering evergreens, and open fields. Add some set pieces, such as an elegant footbridge to symbolically cross the babbling brook from the song’s lyrics, and really bring this scene to life.

Perhaps you’re looking for a more pastoral feel? This European Countryside backdrop pays homage to the snow-capped Alps in the distance. Waves of lush green fields roll into gentle pastures in the foreground. The sense of perspective would instantly transport your audience to the magical Austrian highlands. It captures a sense of peace and serenity that will ultimately be threatened by the looming Nazi invasion.

Around Salzburg and Inside the Abbey

Of course, the entire show doesn’t take place among the soaring peaks of the Alpine meadowlands. In one scene, Maria takes the von Trapp children on an infamous trip through town. This Olde European Village backdrop could easily portray a cozy little corner of Salzburg. The cobblestone roads harken back to a simpler time. The brick-lined row houses reveal a cozy village setting that would be a lovely contrast to the vast glamour of the von Trapp mansion.

Similarly, no staging of The Sound of Music would be complete without an Abbey. Maria’s early years were spent at the beloved convent, whose bells brought music into her childhood. Her destiny lies far beyond its walls, but it takes her a while to learn that. With the help of Mother Superior, Maria finds the strength and faith to follow her dreams well beyond her own expectations.

Give this weighty, yet enlightening, setting the grandeur it deserves with TheatreWorld’s Baroque Cathedral Interior backdrop. With stained glass windows detailing Christian symbology and gracefully arching pillars, it’s the perfect blend of solemnity and enlightenment.

If you’re looking for something with more light, an excellent option is the Baroque Windows backdrop. While it also features stained glass, the windows themselves stretch almost the full height of the drop. Light pours through amber archways, revealing regal lavender undertones. The windows are undoubtedly the highlight of this backdrop.

The wedding scene between Maria and the Captain is one of the highlights of the beloved film adaptation. Make it the star of your staged version with this elaborate Saint Patrick’s Cathedral backdrop! Embellished pillars soar into the heavens. A golden altar sits, framed in the center. Rows of pews disappear into the distance, evocative of the immense turnout that would have befitted such an unusual and heartwarming union.

Speaking of the formidable Captain von Trapp, be sure you take no shortcuts in presenting the von Trapp family estate in all the grandeur and majesty it deserves. This Grand Mansion Exterior is an excellent choice. The immense building is daunting all on its own. However, TheaterWorld adds ancient evergreens bordering each side and elegant pools stretching out across the grounds. It’s easy to imagine poor Maria, overwhelmed by her first impression! Your audience will be just as awed by the sumptuous surroundings as the humble new governess.

Of course, that means the interior needs to be just as impressive as the exterior! Go for some real glam with TheatreWorld’s Majestic Mansion Foyer backdrop. Crimson drapes and carpet runners are set off with gold accents that compliment the lamps and chandelier. With arched walkways and a stately columned passageway, this drop simply oozes wealth and prestige.

The Grand Ballroom – B backdrop features similar scale with simpler details. Elegant stairways with intricate railing accents swoop down to meet in the center of this more austere backdrop. Giant windows bring in light from the outdoors, with Alpine mountains looming on the horizon. With its simple yet elegant lines, this room captures the von Trapp family’s stately history while remaining light and open. This drop would make an excellent choice for the ballroom scenes, in which the children win over the hearts of all the attending guests. (And Maria wins over the heart of the Captain for good!)

Of course, not everything in the von Trapp family home happens on a grand scale. Try this Family Room interior backdrop for some of the more intimate scenes. It would make a great choice for Maria’s bedroom, or the children’s playroom, where she teaches them how to sing. With rich wooden details and warm, lush colors, it could provide a cozier contrast to the overall mansion feel.

Or, you could simply stay in step with the stately ambience of such a  grand house, in which case, you may enjoy this Victorian Bedroom backdrop. The high windows, terraced ceiling, and elegant light fixture would keep the lofty feel, while the soft pink curtains and white furniture details would suggest a well-appointed bedroom for a governess, or perhaps a playroom for the children.

While faith, duty, and love of country are strong themes in this show, it wouldn’t be such a classic without plenty of romance! From the young love between the barely-adult Liesl and Rolf, to the indelible romance that blossoms between the reluctant Maria and stalwart Captain, you’ll need a setting that hits just the right tone. Try this Rose Terrace backdrop. With its stone archways covered in a carpet of roses, it could easily double as the gazebo made famous by the film.

Another good option would be this Belle’s Garden backdrop. The gothic archways could call to mind the solemn abbey, while the delicate roses dotting them represent the two loves between which Maria is torn. The fountain recalls eternal youth, so both sets of lovers would be well represented by this romantic setting.

The Von Trapps Escape – The Sound of Music‘s Thrilling Ending

One of the advantages of staging such an established piece is taking the opportunity to put your own personal stamp on it. For instance, this Starry Night backdrop could work well in many scenes, such as the romantic ones just mentioned, or in the tense moments at the end of the show when the von Trapp family is running and hiding from the Nazis.

This Cloudy Crescent Moon backdrop, similarly, would work well during the climax of Act 2. Looming clouds hover against a pitch black sky, providing perhaps the very shadows in which the family hides from their pursuers. The thin sliver of moon hangs tremulously off to one side, as the Von Trapp’s fate hangs so tenuously in the balance. With clever set pieces for them to maneuver around, this scene will crackle with tension!

As history well knows, the von Trapp family escapes the Nazi regime by the skin of their teeth, walking over the Alps on foot in order to reach their freedom. What better way to capture that fantastic flight than with this Rolling Meadows backdrop? The clear blue skies will soothe away all their fears, as they traipse through golden rolling hills to their new home.

This Beautiful Horizons backdrop would conjure up a similar effect. The wide open skies show a future full of possibilities. The lush green fields are not not so different from those in their beloved Austria, which will never be the same again.

You could also fire up some real drama with this Fire Sky backdrop. The interplay of light and dark, of shadow and sunlight, brings a sense of tumultuous change. The light hovers somewhere between sunrise and sunset. It ultimately expresses a feeling of hope that the darkness will never last for long. A new day is just on the horizon!

Breathing fresh life into such a well-known musical is always a worthy endeavor! No matter how many times a classic show has been enjoyed, there are always new generations and fresh eyes that have yet to experience the glory of such a powerful tale. Bringing a new vision also reignites the imaginations of those who may have seen the show many times before, but not quite in this way.

Don’t miss your chance to reintroduce this timeless work of art to your audiences! You’ll be surprised by just how many options we have for this beloved show. Call TheatreWorld Backdrops today to bring your stage alive with the sound of theater magic!