Skip to content
Beyond the ScriptJames and the Giant PeachTheatre Backdrops 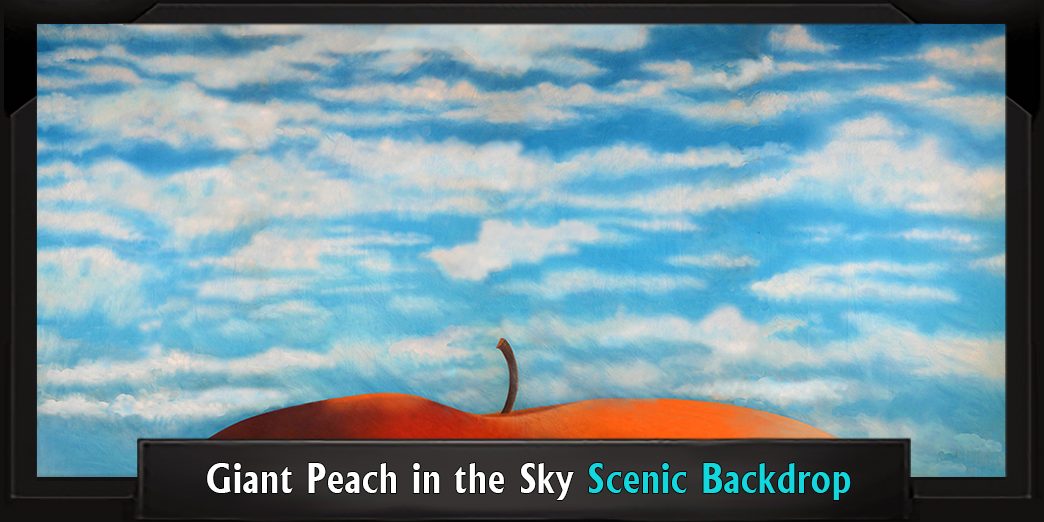 James and the Giant Peach Backdrops and Scenery Perspectives

Roald Dahl has been adding magic to childhood imaginations for decades; James and the Giant Peach is no exception. Written in 1961 and adapted for film in 1996,  James and the Giant Peach is one of Dahl’s most popular stories. Both book and film tell the enchanting tale of little orphan James and his magical adventure as he crosses the sea in a giant peach and finds his place in the world. Full of rich imagery, innocent wonder, and, of course, magic, this beloved story is a natural fit for Broadway, so it’s no wonder it was eventually adapted into a musical.

The musical version of James and the Giant Peach features a book by Allen McDonald, who also successfully adapted Charlie and the Chocolate Factory, another Dahl favorite, for the stage. Benj Pasek and Justin Paul wrote the music and lyrics. James enjoyed its first staging at Goodspeed Musicals in 2010. Though it received mixed critical response at first, reworked versions – including a popular Junior version – have been delighting audiences ever since.

Let’s get to know this charming and family-friendly show, and take a look at how TheatreWorld makes it easy to stage your very own production of this fantastical favorite!

Our tale opens with a narrator figure, Ladahlord, setting the stage for our story (“Right Before Your Eyes”). We next meet James, who languishes in an orphanage after a terrible accident kills his parents. Lonely and traumatized, James pours his heart out to a ladybug and a grasshopper, the only creatures he feels he can confide in.

Consider this Orphanage backdrop for the opening scene. The drab colors and tired looking furniture give an air of neglect. Blues and grays convey a clinical coolness, while sparse metal bunk beds peak out from the side rooms. The gray, bleak windows suggest that there’s no future for James out in the world.

As fate would have it, James learns he has two aunts in Dover. This is not a good development, however, as they turn out to be nasty, mean old spinsters who only claimed their orphaned nephew so they could use him as a slave (“Property of Spiker and Sponge”). They throw him into the basement, and set him to menial tasks. One of the first odious tasks they assign him is to cut down the old peach tree in their front yard – simply because Spiker walked into a spider web and decided to kill the tree.

This Wood Cottage backdrop would make an excellent choice for the house of these nasty old shrews. The patchy thatch roof tops a sagging cottage, which takes center stage, nestled into a dark and misty wood. Both drab and creepy, this uninspiring habitation matches its inhabitants well and reflects Spiker and Sponge’s aging, stubborn, and unattractive personalities. Build a set piece for the old peach tree that will tie into the dark woods, connecting the drop to the stage and bringing depth while allowing the focus to shift to the tree as the story progresses.

This Covered Bridge backdrop would make a great option as well. The old mill in the background could easily be the old aunts’ home. The covered bridge suggests that James is cut off from the world and effectively trapped, unable to reach the friends and adventures he dreams of having.

Another great option would be to build the house of the aunts as a set piece and let this Magical Live Oak backdrop represent the peach tree. Sprawling, ancient limbs spread across the drop, illuminated by an ethereal pink and magenta light illuminates. Set against a mysterious blue and indigo wood, it is not only visually stunning, but offers a bright pop of hopeful color against the bleak world of the gloomy aunts. This is just the kind of tree a magical peach would grow on!

Spiker and Sponge depart for the beach. James reluctantly heads out to kill the tree, but is interrupted by a mysterious person in the woods, the Ladahlord. Ladahlord gives James a magic potion that promises him the friendships and adventures he craves (“Shake It Up”). Before James can drink the potion, however, he trips and spills it all over the tree.

The aunts return and are initially furious to find that the tree is still alive, but when it suddenly sprouts an unusually large, single peach, they decide to profit off the phenomenon by selling tickets to see it to their neighbors (“There’s Money In That Tree”). James dreams of escaping the evil and opportunistic aunts (“Middle of a Moment”). That night, the aunts force James to sleep outside. Cold and lonely, he soon notices a tunnel into the peach. Inside, he finds a ladybug, a grasshopper, a spider, a centipede, and an earthworm, also grown to enormous proportions by the magic potion. Suddenly, the peach’s stem breaks, sending it rolling over the aunts and down to the coast, where the giant peach floats away into the ocean (“Floating Along”).

This enchanted peach is the setting for most of the rest of the show. Fortunately, TheatreWorld has the perfect backdrop for it! This Giant Peach in the Sky backdrop, featuring the eponymous peach itself, was specifically designed with this show in mind.  While the wispy cloud details are meant to show the peach floating through the sky, it can easily be used for the ocean scenes as well, making this drop a must-have for this musical.

If your artistic direction means you need to really differentiate between the floating and the flying peach, try this Sunlit Ocean backdrop for your floating scenes. The bright sun peeks out from behind cottony clouds, sparkling off the ocean waves and bringing depth and horizon to your stage.

For some added mystical quality, consider this Moonlit Ocean backdrop. It would play off the floating peach drop with some cool contrast. A huge, full moon nestled amidst murkier clouds hints at some of the darker elements of the story and foreshadows some of the travails yet to come for James and his new arthropodal companions.

James and his fellows survive by eating the inside of the peach, but worry what will happen when they run out of peach to eat. They distract themselves by sharing their own personal stories (“Have You Ever Begun to Wonder?”, “Everywhere That You Are”).

Meanwhile, Spiker and Sponge – too mean to die – sit on a cruise ship to America comforting each other (“I Got You”) and lamenting over the money they lost when the peach rolled away. Suddenly, they spot the peach floating out on the sea and convince the ship to turn in its direction.  This Cruise Ship Deck – B backdrop would be just right for the re-emergence of the show’s detestable duo. Rich wooden decking gleams under the sunshine. In the background, the sapphire ocean meets a rich blue sky. Porthole and funnel details are distinct but don’t suggest any particular time period. It’s an excellent match for this show.

While the aunts scheme, the peach and its inhabitants get attacked by sharks, so James comes up with a plan to attach it to some passing seagulls using the spider’s webs. In the midst of this unlikely takeoff, Centipede falls into the water (“Plump and Juicy”). James rescues him and, in doing so, finally wins the reluctant centipede over.

The Giant Peach Arrives in the Big Apple

The floating peach arrives in New York City, where Spiker and Sponge are waiting to attack it with torpedos (“Empire State/The Attack”). The peach impales itself on the Empire State Building.  James and his friends safely escape, but the peach then rolls off and lands on James’ aunts, properly squishing them this time. Now heroes, James and his friends settle into their new home inside the peach pit, now permanently located in Central Park (“Welcome Home”).

This Central Park backdrop would be just the thing to end this madcap adventure. Trees standing proudly around a bridge-spanned creek. The famous skyline is displayed in the background. It captures the feel of Central Park without being too modern to conflict with the period of the show. The bright sky peeking through the skyscrapers harken back to the friends’ aerial adventures, while also hinting at the wide open future ahead for James and his new lifelong friends!

Another option that would work well is this NYC Skyline from the Park backdrop. This drop showcases more skyline. The foliage framing the drop is darker and would match well with a moodier artistic direction. The sky still beckons, while the river details also pays homage to the seafaring part of the story.

Heartwarming and nostalgic, with themes of friendships found in unlikely places – and, not to mention, the karma waiting for those with small and shriveled hearts – James and the Giant Peach an adventure worth taking. Particularly suited to theatre troupes that have lots of talented youngsters, James and the Giant Peach is sure to take your audiences soaring to new heights of delight! Contact TheatreWorld today to put together your own backdrop package for this charming morality tale.