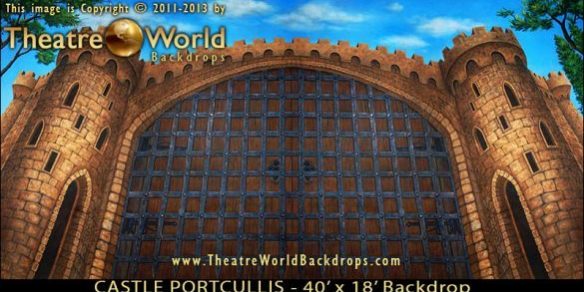 Monty Python has a cult following that resonates with fans worldwide. The group’s reach hit Broadway in 2005, as SPAMALOT made its first theatrical run, blending Monty Python’s humor with anecdotes from long-running Broadway shows. This comical take on King Arthur’s quest to locate the Holy Grail created even more Monty Python fans. Even more impressively, it was awarded three Tony Awards. The rights to the show became available (via Theatrical Rights Worldwide) to schools and troupes who spread the art of theatre off-Broadway.  Recently, our Directors’ Roundtable and artistic team worked together to create an updated suite of backdrops for SPAMALOT.

Our first venture into providing scenery for this production gives Directors access to brand new, Python-esque imagery. The portcullis, a heavy iron gate used to seal the entrance to a castle, is one of the most familiar visuals from medieval architecture. It is also synonymous with the many castles and estates that Arthur visits in SPAMALOT. Our Artistic Team took this into account when designing our first SPAMALOT backdrop.

Our Castle Portcullis backdrop is the newest addition to our Signature Series and is now available for your theatrical productions and themed events. This drop gives your audience the feeling of looking up at an enormous stone castle. The structure is complete with pillars and, of course, a portcullis. The general Monty Python undertones make it a great choice for several scenes. Use it as the Swamp Castle or, alternately, in combination with your large wooden rabbit left for the crude French soldiers. 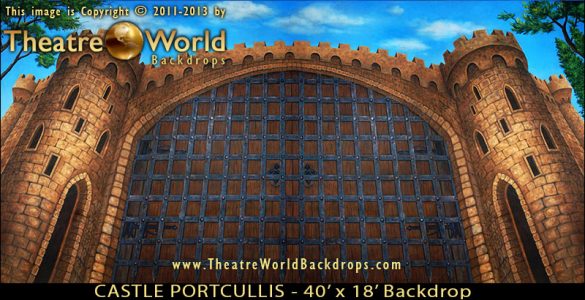 We will have even more drops dedicated to SPAMALOT releasing into our rental inventory over the next three months. Our team has already put together designs for a Stylized Vegas Castle, Stylized Vegas Wedding Chapel Castle, and Castle Chambers. We’re also working on the very necessary Dark and Extremely Expensive Forest.  This collection of backdrops will provide imagery for every critical scene in the script. From Python’s Vegas-inspired vision of Camelot  to the Dark and Extremely Expensive Forest, Directors will have access to an entire show package that screams Monty Python. We are happy to begin rolling out this package today. We look forward to sharing even more scenery for this show in the very near future.

The Little Mermaid: Going Beyond the Script
October 5, 2016

Alice in Wonderland: Going Beyond the Script
August 30, 2016