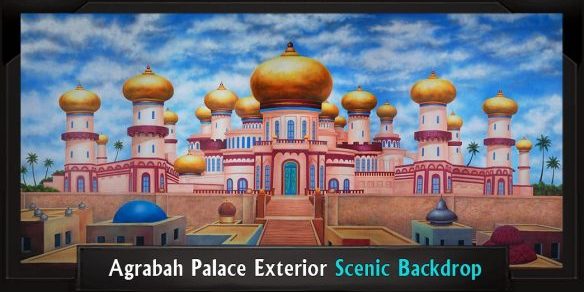 Disney’s Aladdin is currently running on Broadway, receiving rave reviews and seemingly endless awards. Even if you’re not in New York City, however, you can bring the magic of Agrabah to younger audiences everywhere with the Jr. Edition! Let’s take a magical carpet ride through some of our vibrant backdrops that bring us back to those Arabian Nights.

First impressions are everything. Our story opens up in the dazzling desert city of Agrabah. Don’t miss this opportunity to bring the wow factor with this amazing, vibrant backdrop that depicts the palace and city! You will immediately draw your audiences into the world of magic and mystery in a way that simply can’t be done with just lighting and props. Choose from a close-up of the palace with its gates open to the city or a more grand-scale desert scene, showing Agrabah in the not-to-distant background. Either option will transport your audiences and cast alike to the steamy desert. 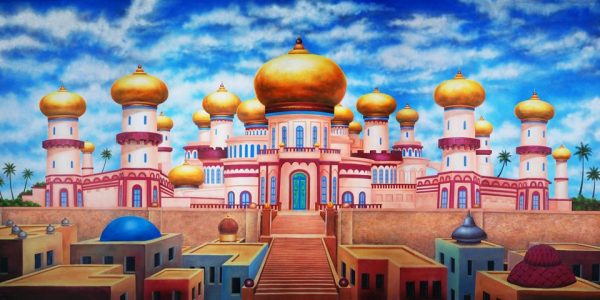 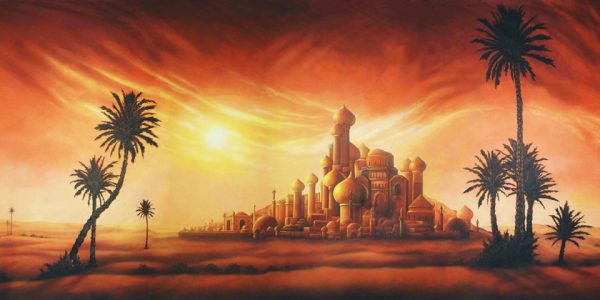 Jasmine, who must choose a husband soon whether she likes it or not, looks on unimpressed as stuffy, boring princes from neighboring realms parade themselves in front of her and her hopeful father. Before long, Aladdin breaks into the scene with a stolen piece of bread and, during the chaos, Jasmine seizes her chance to escape her gilded cage and flees.

She runs straight into our street rat, who immediately bonds with her over their shared feelings of being trapped in their own lives. You won’t want to miss the chance to show the colorful world of Agrabah’s marketplace with this vibrant Agrabah Marketplace backdrop! For a more intimate setting, you can always opt to show Aladdin’s shabby room in the bowels of Agrabah. 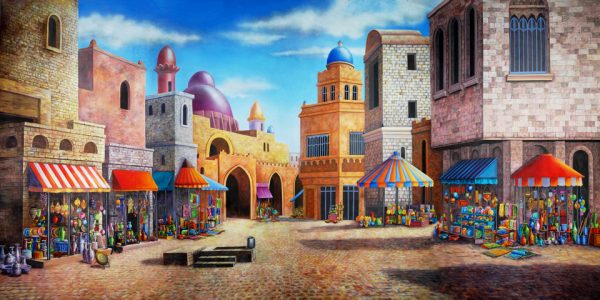 Dungeon Drops and Aladdin in the Cave of Wonders

Shortly after their shared moment, Aladdin is seized by the palace guards. Jasmine reveals her true identity in an attempt to save him, but, regardless, Aladdin is dragged off to the dungeons. This ominous, stony backdrop is a great way to evoke that sense of underground incarceration.

Meanwhile, Jafar is deep in his own plot to ensure Jasmine will have to marry him if she doesn’t choose another husband in time. He finds Aladdin and, thinking he is nothing more than a dispensable street urchin, sends him into a creepy cave to find a mysterious treasure. Inside the cave of wonders, Aladdin finds a lamp and rubs it. He is shocked to find he’s released a Genie, whose personality is even bigger than his cosmic powers. You can set this scene against a backdrop of glittering treasure or opt for a more mystical-feeling cavern. Either setting would be perfect for the Genie’s unforgettable introductory number. 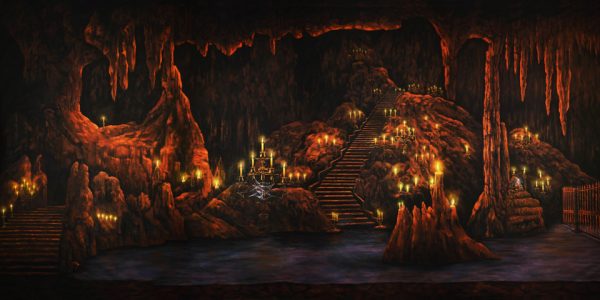 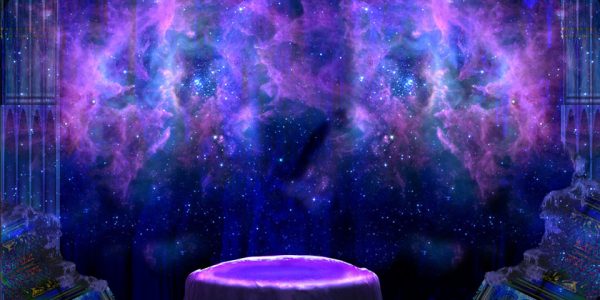 Still smitten with Jasmine, Aladdin uses one of his three wishes from the Genie to assume the role of Prince Ali. He swoops off to the palace to present himself as a suitor, this time of “royal” status befitting a princess.  Jasmine is unsure at first, but Prince Ali’s charm eventually wins her over and she lets Aladdin take her on a magical carpet ride. By the end of the night, the pair are madly in love and plan to wed in the morning.

Can’t you just see them flying against this vibrant moon while a shadowy Agrabah slumbers beneath them? If you want to really sweep your audience away, choose among several of TheatreWorld’s nighttime skies. (And heighten the romance of this scene with the full moon glowing behind them.) Any one of these choices will enhance the scope and romance of this iconic moment in the story. 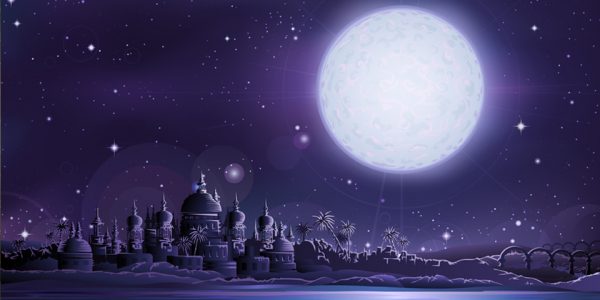 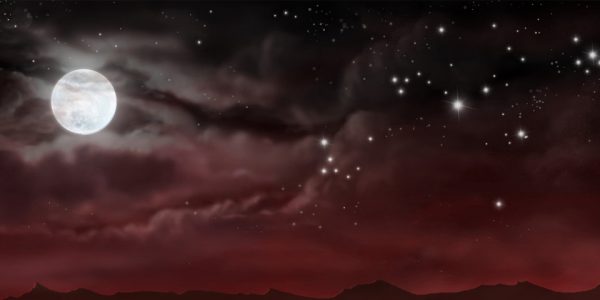 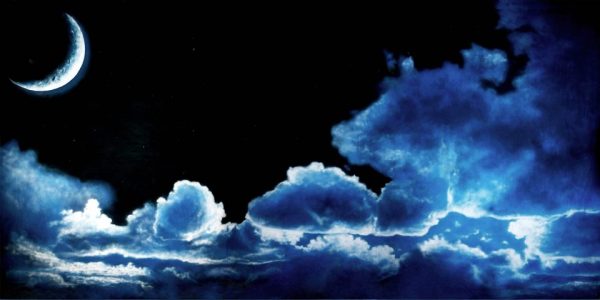 Of course, cunning Jafar won’t be that easily fooled. He suspects the truth behind “Prince Ali” and attempts to have the impostor arrested. Aladdin uses his second wish to escape, leaving behind the lamp. Unfortunately, the enchanted object finds its way into Jafar’s hands. With the powers of the Genie at his disposal, Jafar attempts to seize as much power as possible. Regardless, all is not lost. Aladdin tricks Jafar into wishing he was a genie himself. With Jafar trapped inside the magic lamp and the Genie set free, Aladdin and Jasmine can enjoy their fairy tale ending. These exciting events can unfold against the Palace interior. Alternately, you can choose a magical and ethereal drop that evokes the cosmic powers at play in the flashy finale. 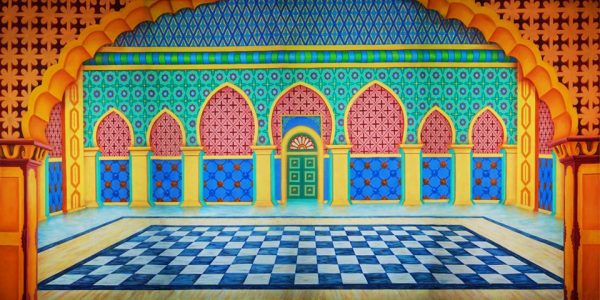 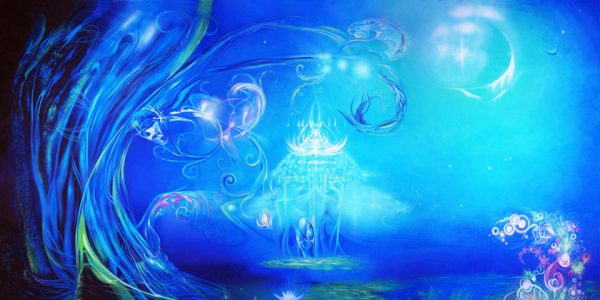 Aladdin is a beloved tale of overcoming obstacles and breaking free from the boxes life tries to put you in. So why not break free yourself and take some chances with your staging? Try something new, something spectacular, something unexpected. Like Aladdin, this is your chance to prove that there’s more than meets the eye. Audiences old and young alike will be smitten with your bold choices. TheatreWorld has all the backdrops you need to push your production over the edge from fun into fantastic. Make it a show they will never forget!

TheatreWorld looks forward to helping you create your own unique and custom designed spectacular vision through our Signature Series of backdrops and designs. Click or call us today to see how we can complement your production.