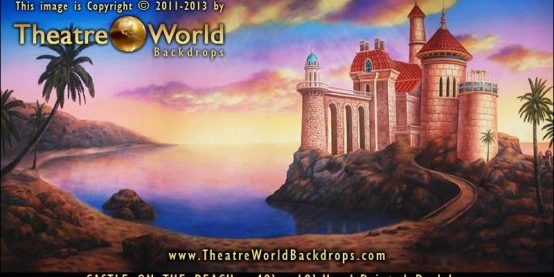 THE LITTLE MERMAID is a classic show, dear to audiences and Directors alike. This versatile show delivers a wide array of emotions, ranging from bright and upbeat to dark and sinister. Directors also have the option of choosing between obtaining rights to the script for the full show or a Junior version, depending upon the age of your cast. Once you know the age of your actors and have decided upon which themes and emotions you want to incorporate into your production, it’s time to start planning out your scenery options. We tapped our Directors’ Roundtable for their thoughts on the best scenic imagery for this popular show.

Under the Sea – Coral Kingdom

Every LITTLE MERMAID production needs high quality undersea scenery. If wish to use one backdrop to support multiple undersea scenes, we suggest something that’s vibrant, colorful, and chock full of sea life. That is exactly what our artists had in mind when they were drafting and painting our Coral Kingdom drop. In fact, this particular backdrop was developed specifically to support THE LITTLE MERMAID. The backdrop depicts vibrant fish, a sea turtle, coral, and one of the ocean’s most notable inhabitants, the great white shark. Use lighting to emphasize the coral and fish to convey a cheerful tone. Focus lights on the great white to give any stage a more ominous feel. 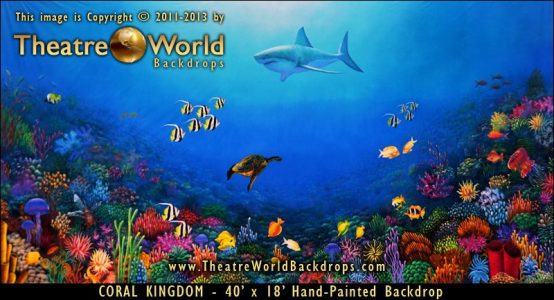 Part of Your World – Ariel’s Grotto

One of the most noteworthy scenes in the production takes place in Ariel’s Grotto. In this scene, Ariel sings the famous “Part of Your World”. This song proved one of the show’s biggest hits, even making its way onto the radio and into remixes by artists like Bruno Mars. (Can you believe that this song almost didn’t make the final cut for the original film? We sure can’t!)  In this scene, Ariel shares her desire to join the human world and her affection for the many collectibles that she has acquired over the years. This drop sets that scene perfectly. It features an assortment of human objects, from vases to a treasure chest to Spanish armor. 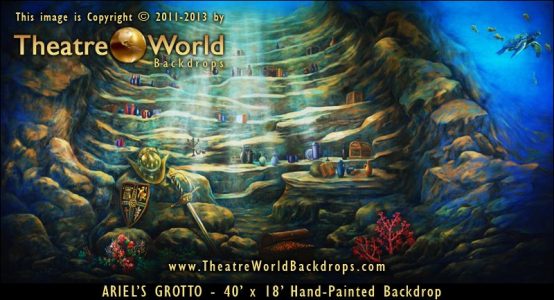 After Ariel saves Eric’s life, she falls in love with him and longs to join the human world. However, her father has firm rules against interacting with humans. Desperate, she seeks help from her Aunt Ursula, a sea witch.Ursula needs a sinister abode that is befitting her rendition of “Poor Unfortunate Souls.” Our Artistic Team took this into account when designing Ursula’s Lair. This drop allows you create a setting that conveys Ursula’s ominous persona while incorporating her signature fuchsia. Built into an underwater cavern that hints at the rib cage of a sea monster, Ursula’s Lair has even found a home in the second act of some director’s renditions of the production, providing scenery for Triton’s banishment. 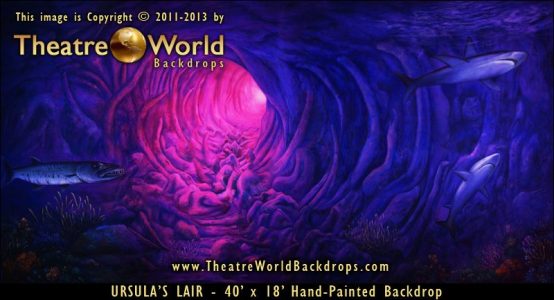 “Out of the Sea” – Scenes on Shore

This show doesn’t just stay under the sea. Many of the scenes call for settings that take place on dry land and in a royal setting. With that in mind, our team designed Castle on the Beach. This backdrop gives you imagery for many scenes in the production. From the time Ariel pulls Eric onshore to Eric choosing his bride during “The Contest”, this drop will give you all of the background elements that you need. 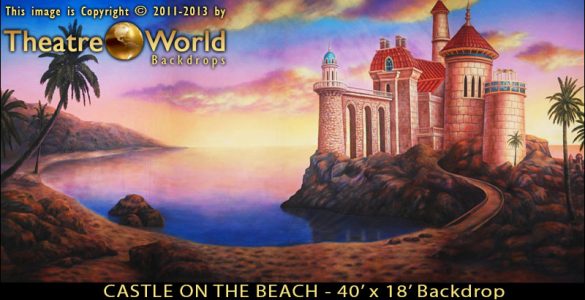 Castle on the Beach Scenic Backdrop

Our Directors’ Roundtable chose four from our LITTLE MERMAID collection that they feel sum up the show. If your vision calls for additional scenes, our team has created a wide assortment of additional options for this show. With the strategic implementation of lighting and the addition of props and set pieces, you can bring your audience into Ariel and Ursula’s magical undersea world no matter where your stage may be. If you are on the hunt for LITTLE MERMAID scenery, we would love to hear about your plans and vision. The creativity that our clients share with us is a constant inspiration. As much as we know theatre, talking to Directors across the nation is always an educational experience.