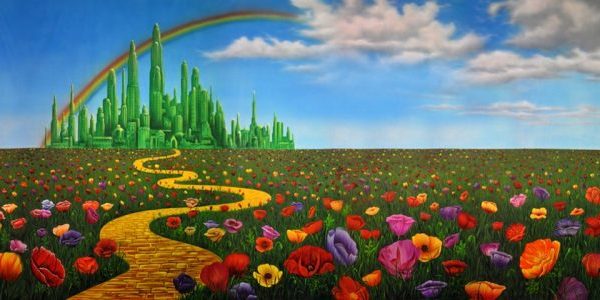 The Wizard of Oz Backdrops and Scenery Perspectives

The Wizard of Oz first appeared as a stage play in 1903. Over the last 110 years, it has been remade many times over for musical theatre, film, and television. L. Frank Baum’s beloved tale of displacement, enchantment, friendship, and loyalty has been reinvented time and again over, and with each retelling it seems to grow ever stronger.

Theatre is all about choices. From casting to staging to lighting to performing, every choice builds on the other. We all want the deafening applause at the end of the night. Luckily, Oz is a show full of choices with potential to wow your audiences. For one thing, there are two different licensable versions of the show. The MUNY version is more faithful to the book and the RSC version tracks closer to the film version. This means that, depending on your audience and your creative desires, there are endless ways to backdrop this beloved tale. Let’s take a walk through the show and get creative!

Dorothy is a bright young girl railing against the bland, austere simplicity of farmland Kansas. Some clever and colorful costuming or lighting against this black-and-white backdrop can go a long way to really capture that contrast. Evocative of old-timey farm country, the road leading off into the distance still suggests a journey, a longing for what lies beyond the horizon. One can also imagine danger lurking just out of sight, like nasty Miss Gulch descending on the farm to torment poor Dorothy and her little dog, too. 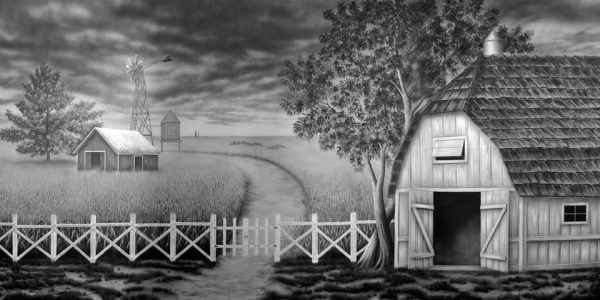 For a greater sense of looming fate, stretch the horizons with these endless corn rows in grey scale. This backdrop is suitable for a nuanced reimagining for a more adult audience. You still get the sense of space and horizon, but with less hominess. This backdrop could easily increase the sense of displacement and loneliness of the original tale, as better captured in a MUNY staging. Sung against either backdrop, “Somewhere Over the Rainbow” will have your audience longing for more right along with our young heroine. (Bonus: both backdrops are available in colorful versions for later on!)

Luckily, Dorothy doesn’t have long to wait. Lighting and pyrotechnics and clever wire work, can sweep your audience into the great storm that snatches Dorothy up into the sky. One thing is for sure: you’re going to want to take full advantage of the transition to Munchkinland, with its jarring landing into the world of color. Vibrant costumes and a sparkling Glinda will play beautifully against this colorful backdrop. Props and set pieces can add a lot to this important transition, but don’t be afraid to go all-out and really give your audience some bang for their buck.

But not everything in OZ is bright and cheerful, and even Munchkinland is not safe. The Wicked Witch of the West, with her dark costume and verdant skin, will stand out in hideous contrast against all this color and light. It’s only a matter of time before Dorothy stands before the Witch’s wrath wearing the infamous Ruby Slippers. Your audience can join her as she starts off along the Yellow Brick Road, which is featured prominently in these drops.

The Road to Oz/The Forest

Even in Oz, it’s not safe to travel alone. As Dorothy begins her trek to find the Wizard, she meets unlikely characters who become her trusted and faithful companions. The hapless Scarecrow is the first to join our heroine. Next is the Tin Man, who is rusting away out of reach of his oil can.

For the MUNY version, you might want to go with an enchanted forest backdrop that is charming, yet mysterious. While it is not as dark and scary as a haunted forest, you can still imagine the ominous Jitterbugs hiding in the shadows. If your staging is for a younger audience and you’re looking for a lighter, more RSC version feel, why not choose colorful hills that could easily belong to countryside OZ? 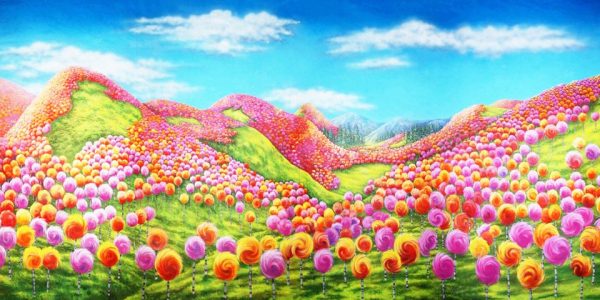 Whether you’re including the Poppy Scene or not, there’s nothing like our travelers’ first glimpse of OZ. (Which now includes the Cowardly Lion.) Take your audiences’ breath away with this stunning backdrop, featuring the Emerald City and the rainbow Dorothy has always longed to find.

The Road To Oz Scenic Backdrop

Getting into the Emerald City and securing an audience with the Great Wizard proves more difficult that Dorothy anticipated. Regardless, she wins a way through for her and her companions with her pluck and charm. Nothing can capture the size and grandeur of the great City like this backdrop, which works equally well as a city setting as it does for the grand chamber of the Great Wizard himself. Our ROAD TO OZ backdrop is so stunning, the backdrop was even used at the 75th Anniversary party held at the famous Chinese Theatre. (It was approved by Warner Brother’s Studio itself!)

In keeping with the quest, Dorothy is again beset upon to undertake a task in order to get her heart’s desire. The Wizard, who has proven to be rather terrifying, insists that Dorothy obtain the broomstick of the Wicked Witch of the West before he will help her get home. And so Dorothy and her group find themselves braving the Haunted Forest. (Not to mention all the dangers and enemies the Witch throws against them, trying to impede their progress.) 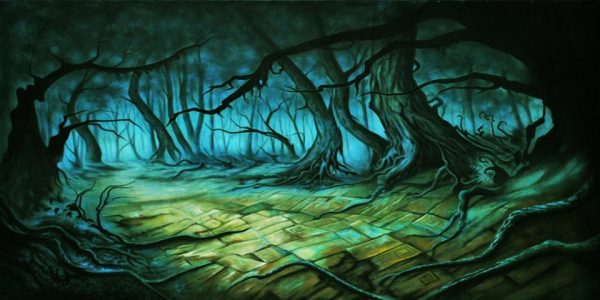 The Witch captures Dorothy. When her friends try to rescue her, the Witch threatens to set fire to the Scarecrow. Dorothy, thinking fast, throws water to put out the fire – but extinguishes the Witch instead. Or, as happens in the MUNY version, a quick-witted Dorothy pushes the evil witch into a cauldron, ending her dark reign forever. Either way you stage it, the evil Witch’s castle looming in the background will add to the drama and danger of this timeless climactic scene.

Victorious, Dorothy and her gang make their way back to the Emerald City to claim their prize, only to discover that the Great Wizard is nothing more than a con artist with a microphone. All hope is not lost, however. In the darker MUNY version, the Wizard offers to take Dorothy home in his rocket ship. He himself is from Omaha. After he reveals his secrets, there is no reason for him to remain in OZ. However, fans of the film will expect the return of Glinda and look forward to and her assurances that Dorothy has always had the means to rescue herself. With a few clicks of the heels of her Ruby Slippers, Dorothy wings herself home with the timeless utterance, “There’s no place like home.”

Back Home in Kansas

Finally, the storm is over. Dorothy is right back where she started, but everything is different. Or maybe it’s just Dorothy herself who has changed. She can now see and appreciate the brightness and beauty of her own family and home. Everyone has learned a little bit about themselves and their place in the big wide world full of wonder, danger, and adventure. 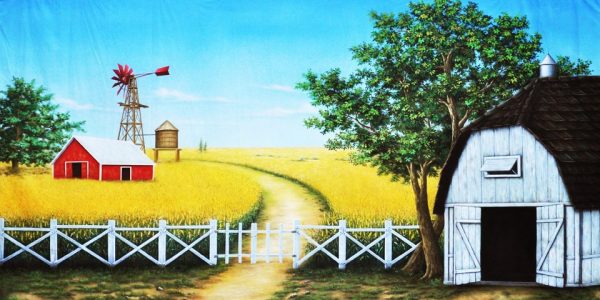 Now, your opening backdrop can now be revealed in bold color, which perfectly complements the themes of the RSC ending. For the MUNY ending, capture the same essence with a colorful cornfield against a stunning sunset. (Or is it a sunrise?) It’s the perfect way to end a familiar story while still evoking a sense of time and space and the mystery of adventures still to come.

Just because the story is familiar doesn’t mean you can’t do the unexpected. Instead, why not take the chance to be bold? Think outside of the box, and thrill your audiences by putting a fresh, raw spin on a familiar classic. We’ve shown you a few ways you could put a distinctive mark on your production – now it’s your turn. How would YOU use all the imaginative backdrops at TheatreWorld to bring your vision to life?